The idea for this sprung to my mind whilst driving back from a beautiful Sunrise festival in the summer of 2010, to which I’d travelled with Venus of Reclaim Love, my dear friend Sarah Bear at the wheel and others too I do believe…at least I think! I’d had the meeting of a lifetime with a long term hero of mine, Jonathan Cainer and was feeling upbeat. There’d even been a miniature upside rainbow in the sky above our heads as we spoke and for an unprofessional rainbow spotter like me, that was very exciting indeed. With this in mind, I thought I’d plan something big like a ten-day event countdown to the date 10.10.10 and include Mass Moon For Peace; High Tide For Change to coincide with the Libra new moon, which I believe echoed the astrological alignments of 9/11 in some way.

It was colossal. There weren’t thousands of people or anything but everything that occurred as part of Enough Is Enough, Everything Must Go was utterly far out and there were certainly hundreds of people in all. The support, friendship and collaboration that took place was calmly spectacular.

I just found a video clip of it that I’ve never been able to upload and so took another clip of it along with a more recent song and current update on where I’m at right now.

This event earmarked the next stages of me giving my life away. It had started around the time that I finished collecting discarded Royal Mail rubber bands in New Cross in 2005 and bought Eileen The Cameravan. I had to scale down and so held a ‘for-takes-party’. People could walk away with anything that wasn’t masking taped up in the corner. Since then, I’ve been narrowing down my art and life to neatly fit inside this machine and there’s still a way to go.

I was pretty exhausted by the end of 2010, another whirlwind year which had included a magical trip to West Africa, some cosmic time in Brittany and the filming of my first bath clip too. 2011 began and thus was born ReBeLievE.R. The summer swooshed by and then it was time for Mass Moon Peace II; HighE.R. Tide For Change. That was held on the Aries full moon on Tuesday 11th October. My mate Dave Baker filmed this one…although now I can’t seem to access it on the world-wide-web so am unable to link it here. Still it was a corker and not your most average Old Palace Yard happenings. It’s a good thing to bring some laughter to the street and do some light work with the people I meet.

As for the meaning of it all, first and foremost, lest us not forget: 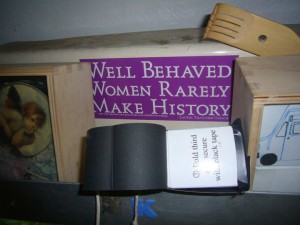 So it seems, the films and photos come and go, as does the moon herself and I’ve always been somewhat fascinated by such things. I don’t recall ever having the ambition or intention to make history but certainly one day thought, ‘Why not? This is a crazy world and I have a beautiful life and it’s all going to end up the same way either way and I’d really, truly like to rest in peace when I die and with the advice of the late American Molly Ivins, have as much fun each day as I can and don’t be afraid to ridicule those at the top in the process for it may even get worse

That really has been my major point, to make a mockery of it all, this farcical notion we call government and state. Many people have misinterpreted me by thinking I’ve done this all to bring attention onto myself when in fact it was only ever a rouse. I blame it on the badge I found in a friend’s van one time: 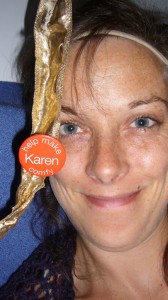 I thought I’d play the media game and quieten down about the need for a global, social, sexual, environmental, political revolution and stick to being so locally personal, Big Brother style and ‘Help Make Karen Comfy’. I’d happily go by un-noticed but there’s so much that gets on my goat.

A wise friend named Cornelius Core Luminous wrote on Monday 10th October 2011 in response to a recent invitation to mass-moon the Palace of WestminstE.R..my immediate thought when I read it was, ‘here here; when will I ever be so eloquent?!’

“Mass Mooning is an ancient practice designed to put the arrogant in their place….. far from being insulting or obscene, mooning is an informational act designed to inform and re-form : the object of the Mass Mooning is expected to take n…ote, to laugh at his or her own folly, and to alter his or her behaviour accordingly.
MASS mooning is non-violent, gentle, uses no resources other than one’s own being, and can be done when ever a decent crowd has gathered.
Some people also like baying at the mooning, to accentuate the informational qualities of the event.
Wolf whistles tend to distract from the core intent….
To take offence at a mass mooning is evidence of hubris, which in and of itself, deserves a mass mooning. If, in lace of the usual placard strewn environmentally destructive events curretly ‘permitted by the State, a mass mooning of Tony B…lair outside the Chillcott Inquiry had occurred, it would for sure have made more Headlines, and a much better video for youtube hits. Thus bringing the issues to more people in a suitable manner!”
…There’s always next year, butt a big part of me is wondering, ‘why wait?’… 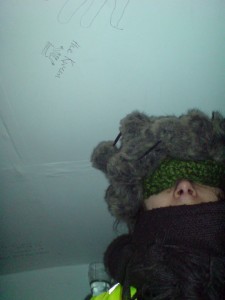 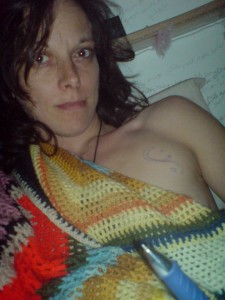