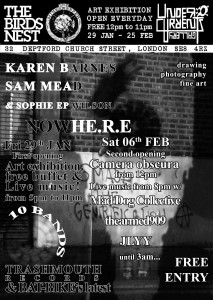 My presence on the www has been incredibly limited for some time now but that doesn’t mean I’ve gone away. Quite the contrary in fact. Examples of recent work, all in progress, are currently exhibited in the Bird’s Nest SE8 4RZ, open daily from noon til close. Saturday 6th February 2016 includes daytime obscura activity, weather permitting and live music from 6pm-3am. A cracking line up including thearmed909, JLYY and Mad Dog Collective. Furthermore it’s all free. We’ll also be hosting an evening of LIVE ART on Tuesday 16th February, 7-11pm and a closing down sale on Thursday 25th February, 5-7pm.

Eileen The Cameravan is still off-road but with thanks to the hospitality of The Hive in Hackney and some faithful support behind the scenes, I have built an alternative box camera obscura on wheels that I recently pushed and pulled from Deptford to Westminster and back again with a little help either end of the journey from Terry the Wizard of New Croz and Rankin the Clown.

In the dark hours before dawn on Christmas Eve 2015, I experimented with test shots of the inversion of parliament and they came out well all things considered. What I’d love to do next is get ETC there for the final composition at 09.09am…one day perhaps, or perhaps not…or perhaps I’ll be pushing and pulling that pesky box again, or perhaps I’ll score a lift all the way…whoevE.R. knows… 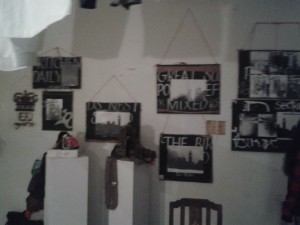 No, the Monday-Friday, 9-5 shot took place shortly after the suicide of a dear friend, Rainbow Mel John in Spring 2016. We’re nearing the year anniversary as I write. The news of Mel’s death moved me to get off my arse immediately and wait no longer for the mechanics, etc to take place on ETC. It’s like Eileen and I been held in a state of limbo for too long, since my return form Mexico in 2009. It was whilst there that the Spike got evicted from Peckham and turned into what the council promised it would not be, a scaffolding yard. (Note spellcheck for ‘scaffolders’…card/office/slaveholder’s…) Coming back to the UK that Summer and the synchronicities of being were fully flowing, furthermore, I was a few months detoxed and couldn’t have been much cleaner and stronger in my sense of being.

There have been near opportunities to fix ETC but the obstacles have always been too great for me to overcome. When I’ve had the money, access has been impossible. As access has improved, I haven’t had the money. Yada Yada Yada. The support in kind that I have received from so many folk means I can never give up on this creative quest and Mel was one of the amazing people who gave me the foundation on which to work. Mel was with me throughout the Climate Camp exposures on Blackheath and shared in the magic of seeing the negatives develop. Mel never told me I looked tired but brought me avocados. Mel was one of the kindest people you could ever have the pleasure of meeting.

Many people have advised me over time to give up on ETC. A friend likes to tell this joke, 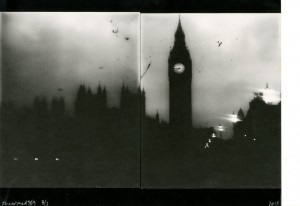 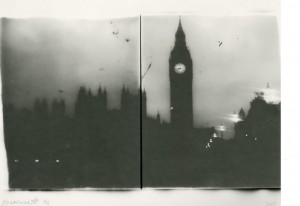 The trip started out much like the test run on the eve of Christmas eve 2015. Access to the gate, batteries for my red bike light, adequate amounts of photographic stock, a hobbit snack, a little wrap of rocket fuel and a large dose of determination. I embarked alone and met some interesting characters on route, I also happened to lose ‘the fluff’ and my ‘THE Metropolitan Police’ whistle. As I neared my most dreaded part of the journey, Elephant and Castle roundabout, a local I know called Dave, deaf since birth appeared before me and helped me the rest of the way to Parliament Square.

The cops didn’t like me traversing north side of the river and today I’m mortified to learn that a woman has been killed on the spot south side that I perch the box at.

I don’t hang around following exposures as it’s a long journey back and the development process still has to occur. With relief I set up my darkroom in a toilet/shower room again as the excitement of seeing these negatives develop was even greater than before. I’d been given large sheets of photographic paper some years back and was eventually given large trays a year or so ago, all of which I was saving for this particular set of prints… 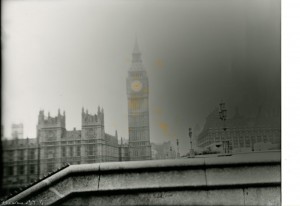 Will met me on the Old Kent Road for the remaining part of the trip back to SE8.

You may notice what looks like nuclear fall out on the image above…this is what I’d refer to as a creative mistake and was caused by shitty adhesive, the thing is though, I like the effect, seems all quite appropriate given the state of Politics here and worldwide over.